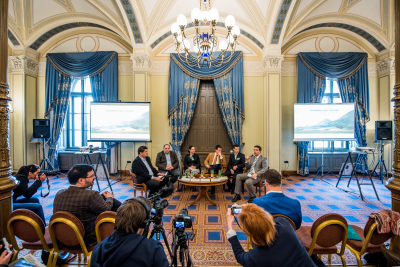 A modern biorefinery is able to bring economic and social recovery to rural communities, and it was revealed in a study entitled "Sustainable rural renaissance through an example of a bioethanol plant", which was presented at the Hungarian Academy of Sciences on Tuesday.

A modern bio refinery is able to bring economic and social recovery to rural communities, and it was revealed in a study entitled " Sustainable rural renaissance through an example of a bioethanol plant ", which was presented at the Hungarian Academy of Sciences on Tuesday. The research examined the example of the bioethanol plant in Dunaföldvár, which was established in 2012 in Pannonia Bio, located in the heart of Hungary's cornfield farming region.

As a result of the investments of recent years, the home-based economy based on sustainable raw materials has become the most competitive in Europe. The ethanol production based on local processing of fodder maize, complemented by the co-product with animal feed, offers a level playing field in disadvantaged areas, which few industries have. So it is not only home-made bioethanol that is important for climate protection, but it can also be the key to catching up with the countryside, which could be a leap for the Hungarian economy.

The overall results of the research have shown that the operation of the bioethanol plant contributes to the renaissance of the country through four basic channels:

It creates jobs directly and indirectly in a rural area requiring a skilled workforce, helping to retain the skilled workforce and preventing selective migration that would lead to the dampening of human capital;
As a significant local business tax payer, it contributes to maintaining or increasing the level of local public services that is perceived by all members of the local community;
It creates a lasting and predictable demand for a wide range of suppliers, which encourages greater competitiveness, contributes to diversification of activities and expansion of employment.
Predictable, stable demand and mitigating investment risks encourage agricultural development. In the absence of ethanol production, every second agricultural investment would have been less likely to occur.

"As a result of the investment, deterioration has deteriorated significantly in the region, and the tax capacity of the settlement has increased threefold, and the average wage in the factory is twice as high as the national average," said Ferenc Hódos, Strategic Director of Pannonia Ethanol.

The research was conducted by Dr. Bálint Koós, a research group of the Center for Economic Research and Regional Research of the Hungarian Academy of Sciences. From the methodological background of the research it can be said that 24 key interviews, two questionnaire surveys, two focus group interviews, and comprehensive statistical data analysis were conducted to reveal the social and economic trends of the region. The data was collected in 2016.

The full text of this study can be found here (pdf)

The results of the research were presented by Dr. Bálint Koós and Gábor Király , researchers at the Hungarian Institute of Economics and Regional Research