RURAL RENAISSANCE: THE SOCIAL AND ECONOMIC EFFECTS OF A MODERN BIOREFINERY 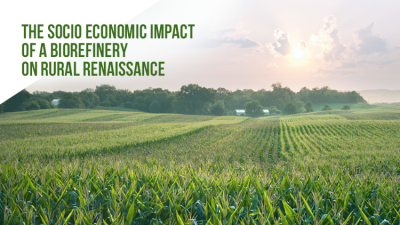 Pannonia Bio operates a biorefinery in Dunaföldvár, Tolna County, Hungary with feed grade corn as the biomass used in processing. Animal feed, bioethanol and corn oil are produced from this feedstock. Farms in the region supply over one million tons of corn to the plant each year. From this, the refinery produces 325,000 tons of animal feed, 450 million litres of bioethanol and 10,000 tons of corn oil. Local processing of the corn for export adds considerable monetary and nutritional value to the raw material. 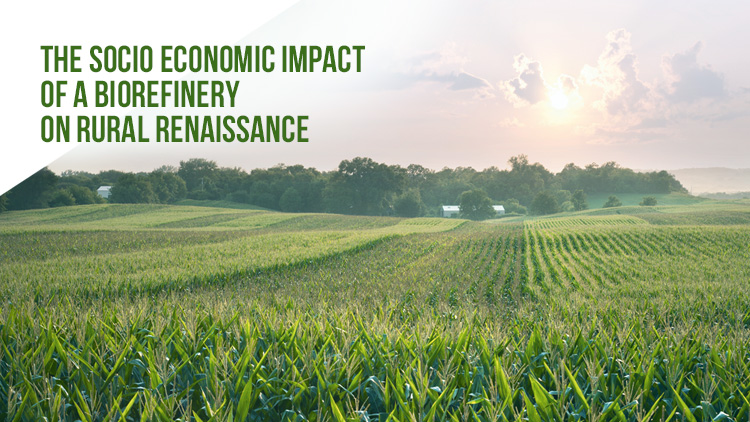 The animal feed is exported by barge on the Danube to countries all over Europe and the Middle East. Its nutritional and health qualities make it superior to raw corn as animal feed. The ethanol is exported by train to oil refineries in Europe where it is blended with petrol to reduce carbon emissions from transport fuels.

The biorefinery is set in a rural area on the banks of the Danube one hundred km from Budapest in the very heart of Hungary’s maize growing region. The nearest town, Dunaföldvár (population ten thousand), is 5 km from the plant. Family farming is a major economic activity in the surrounding area. The biorefinery commenced operations in 2012 and has more than doubled in capacity since then. The plant uses state-of-the-art technology and is also a nursery for development of new bio-based technologies. 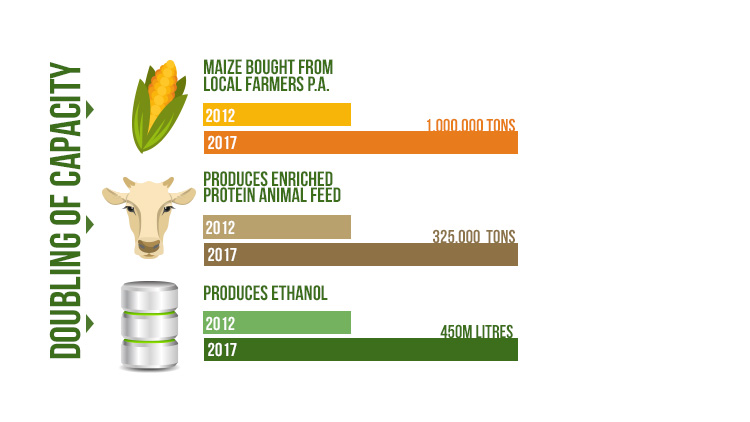 The town of Dunaföldvár was affected negatively by the 2008 international recession. Natural decline in the population of the town was exacerbated by significant out-migration. In recent years new investment turned the balance of migration positive and has made Dunaföldvár one of Hungary's most developed towns. The bioethanol plant, which employs 172 people directly and has created over 2,000 jobs indirectly, has been a factor influencing this change.
This summary illustrates the socio-economic impacts of the fully operational Pannonia Ethanol biorefinery on stakeholders in the region based on the findings of research conducted by the Center for Economic and Regional Studies of the Hungarian Academy of Sciences during 2016.
You can reach the full study here in pdf format 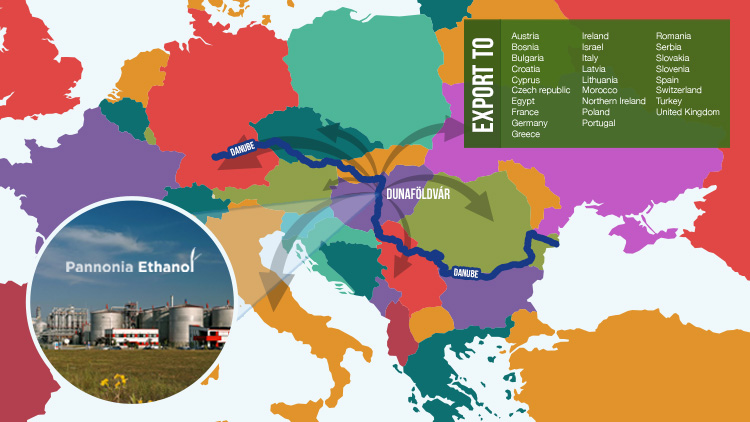 Impacts on the Local Economy

Direct impacts of the plant have significantly influenced the quality of life in the Dunaföldvár neighbourhood and include the creation of high quality, permanent jobs; reduction in outmigration from the area; lower unemployment; improved public services and better employee compensation packages than is usual for the area.

Job Creation
Almost 3,000 jobs were created during construction in 2011. Since commencement in 2012 direct employment has risen to 172 from the original 78. The plant is estimated to support over 2,000 indirect jobs. Employment is created in trade and service industries that support the plant operation, sales and logistics. Indirect jobs are supported in areas such as maintenance, mechanical upgrades, and industrial cleaning; landscaping, ground and facade upkeep; quality control, insurance, rail, road and barge logistics support for shipments of animal feed and ethanol and freight forwarding. The relationship with Pannonia Ethanol has improved service providers’ investment, development and employment indicators. This in turn has enabled them to expand their client base. A further indirect impact is that the previous jobs of those working at the plant have had to be filled, creating opportunities for entrants to the labour market. 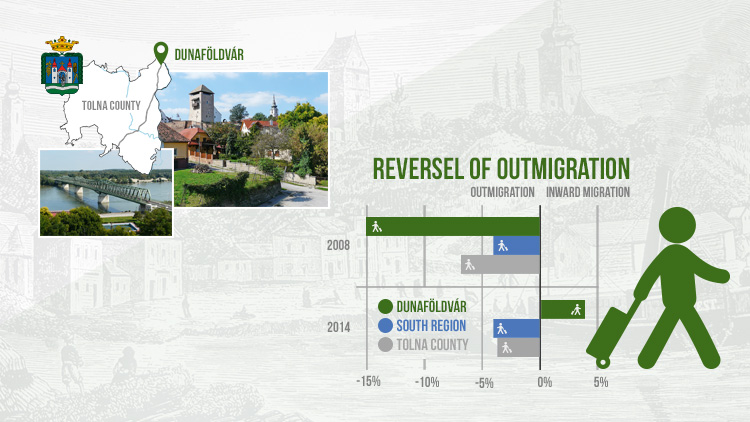 The Dunaföldvár plant offers attractive conditions and remuneration higher than typical for the locality. The impact on income locally is shown by a sharp rise in those paying taxes in the highest income bracket. Income levels also generate additional demand for goods and services provided locally.
Impacts on Local Tax Revenue, Local Government and Business
The bioethanol plant has significantly improved the financial position of Dunaföldvár, securing a sizeable financial surplus for the town, enabling debt reduction and providing surplus funds for infrastructural upgrade. Pannonia Ethanol is now the town’s largest taxpayer. 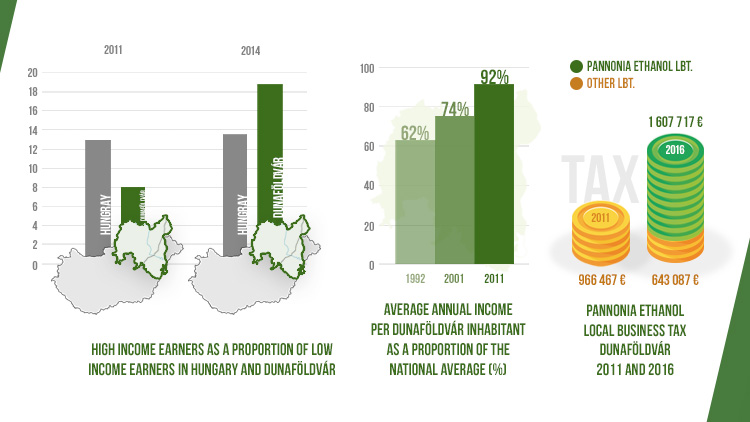 The research was based on the impacts of the biorefinery on the operations of maize farmers who had a long term relationship with the company. The study found that Pannonia Ethanol is a stabilising influence on the Hungarian maize market that reduces operational and investment related risks for maize farmers, as well as improving the profits they earn. This predictable and stable demand for maize mitigates price fluctuations. The company purchases maize directly from farmers, giving them better returns by cutting out the middlemen that are necessary as aggregators if the maize is exported. The plant contracts with both small and large farmers, with the lowest contracted supply quantity at 25 tonnes. The benefits are spread evenly, irrespective of farm size. 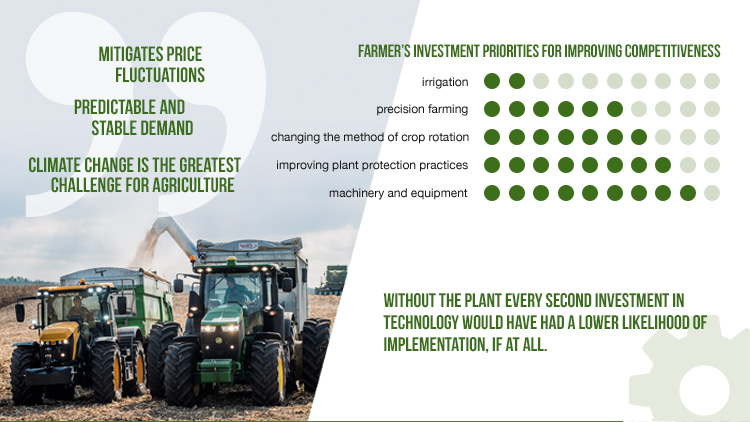 The company’s entry into the market also contributed to improved payment discipline and reliability of payment for farmers, which was not always the case previously. Farmers agreed that the market was undoubtedly more transparent now than in previous years and that the operation of the plant reduced risks for them.

Intensive investment activity suggests spill-over effects from the presence of plant. Farmers found investment feasible at an earlier stage or on a larger scale in technology that improves competitiveness. The risk inherent in investment is lessened, with the survey showing that without the plant every second investment in technology would have had a lower likelihood of implementation, if at all. The finding may have implication well beyond the study area.

Farmers see climate change as the greatest challenge for agriculture, with greater risk from more frequent extreme weather. Their primary adaptation response to this included reducing the sown area of maize, growing drought-tolerant maize hybrids, and improving the soil's ability to retain water. Lack of capital and the national regulatory environment are seen as factors that most hinder adaptation to climate change.

Directly employed personnel are key stakeholders. Economic studies emphasis quantifiable impacts that can be expressed financially, but do not take account of the human aspects of job creation. Keynote interviews, a questionnaire and focus groups were used to assess what working for Pannonia Ethanol means to employees. 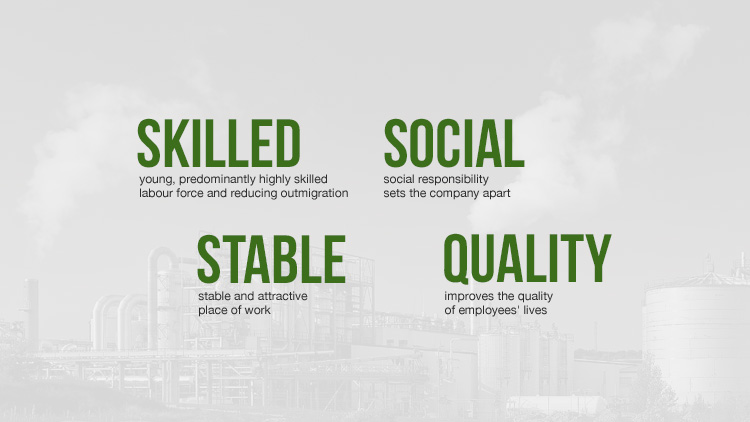 The company recruits primarily from among people living in Dunaföldvár or its immediate neighbourhood. Most respondents had at least 5 years' work experience and had a similar job previously. One-fourth had worked abroad. The questionnaire investigated what employees thought of the company as a place of work, why they decided to join the company and the impact on their personal lives. 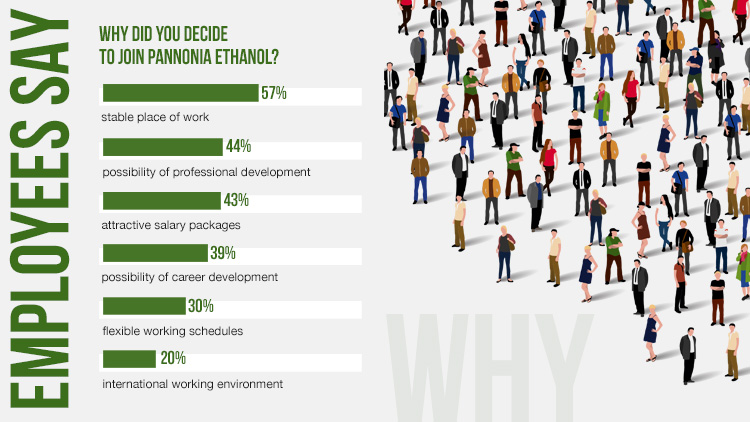 Overall employees found the company an attractive place to work for reasons such as compensation, working schedule, working conditions, professional development and stability. Factors influencing decisions to join the company included: a stable place of work; professional development; attractive salary packages; career advancement; flexible working and an international working environment. Regarding the impact on employee’s personal lives the general consensus was that working for the company represented career progress. Better quality and more active leisure time was related to earnings being higher than in former job. Employees also saw social responsibility as setting the company apart. 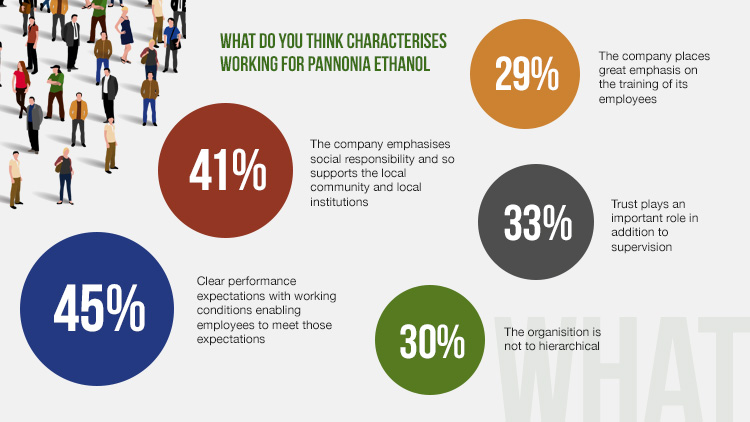 Impacts on Lifestyle and Culture

The research analyses what Pannonia Ethanol means to community life, education and culture in the locality. The direct impact on Dunaföldvár takes two forms. One is the local business tax referred to earlier. The other channel is support to local government and public institutions.
Initiatives include financial support for needy families; IT equipment for the town's nursery, infant school and grammar school; regular support for four major annual events organised through the town’s Cultural Centre. In addition, employees voluntarily organise Christmas collections of clothes and toys for the town's nursery and infant school. Representatives of the public sector and civil society complimented the company on its CSR activities, noting that corporate support for the local community was unknown prior to its arrival. 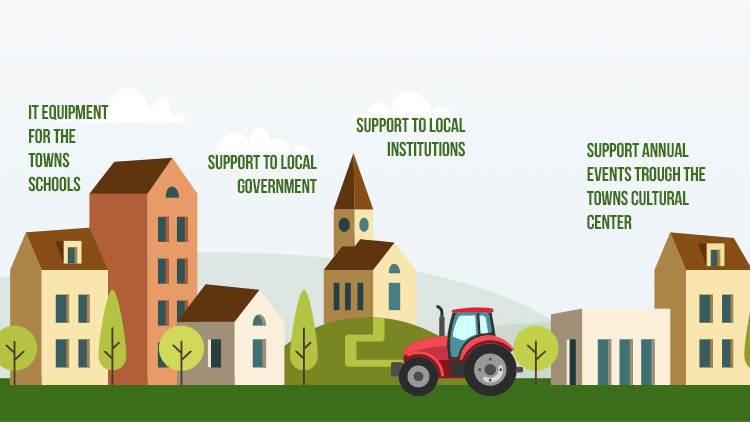 Rural Renaissance
The results of the research reveal that the operation of the bioethanol plant contributes to rural renaissance through four main channels: 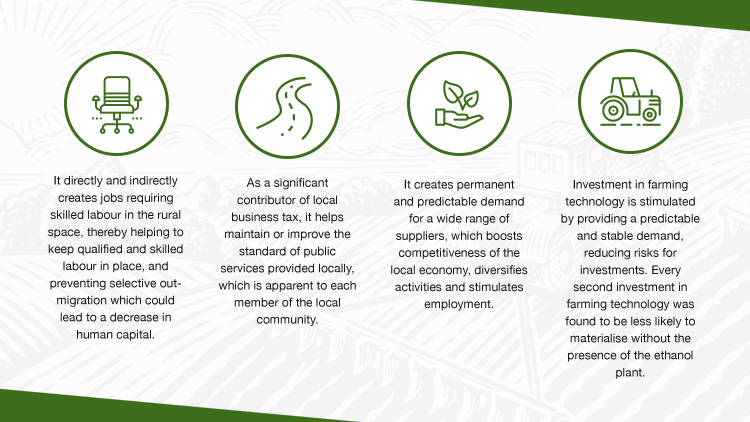 Rural Renaissance Research conducted by the Hungarian Academy of Science, through its Centre for Economic and Regional Studies.
During 2016, the Hungarian Academy of Science, through its Centre for Economic and Regional Studies, conducted a research study on the social and agricultural impact of the Pannonia Ethanol biorefinery. The research examined the local impact of the plant on five groups of stakeholders:
i) employees working at the plant;
ii) maize farmers;
iii) external service providers;
iv) local government;
v) local social, cultural and educational institutions.
Key findings of this study are highlighted in this summary.
The study expands upon the traditional features of impact assessment, mitigating measures and impact management by taking a rural development perspective. One of its main characteristics is that it is ex post, that is it focuses on the local social and farming impacts of a plant that is already operational. The concept of rural renaissance is central to the research approach.
Realisation of a European dream on convergence of regions
The case of the ethanol plant in Dunaföldvár illustrates how a European dream of reviving disadvantaged rural communities could be effectively pursued. It is a whole lot easier to create jobs in urban environments. Doing it further away from business centers is much more challenging. Few industries are capable of providing an attractive future in rural environments, and at the same time contribute to climate change mitigation and energy independence.
The 2016 EU Agricultural Outlook shows that farming in Europe faces difficult times ahead. The prospects are especially bleak for farming in the Central and Eastern part of Europe.
BIOREFINERIES COULD PLAY A CRUCIAL ROLE IN ADVANCING FARMING IN CEE COUNTRIES, THEREBY CONTRIBUTING TO THE CONVERGENCE OF REGIONS,
a core constitutional objective of the European project. The study finds that biorefineries embody rural renaissance.